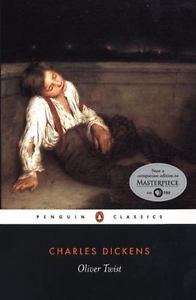 Oliver was in a workhouse since his parents were unknown. He runs away to London and falls in with Fagin, Bill Sikes and Nancy, all thieves. The benevolent Mr. Brownlow rescues him from their clutches but is then kidnapped by them. On a burglary with Sikes, Oliver is shot and nursed back to health by Mrs Maylie. Unbeknown to him, he is being pursued by the mysterious Monks. Through a series of intrigues, Oliver will learn more about his past.

Charles Dickens was born in Kent, England, in 1812 and died in 1870. This is thought to be at the forefront of the social novel, based heavily on Dickens' own experiences. His father had been sent to the debt prison and at 12 he was sent to work in a warehouse, before working up to becoming a reporter in the House of Commons. This is one his most popular novels and let to the wide adoption of the label 'Dickensian' to describe the London of the time.