Let Us Dream The Path to a Better Future

[Let Us Dream The Path to a Better Future]
FRANCISCO -
BERGOGLIO, Jorge M.
Year:
2020
Type:
Books on Spirituality
Public:
Generic
Tags:
Ethics,
Philosophy,
Leadership and Creativity,
Christian Life,
Virtues
Publisher:
Simon and Schuster
City:
London
Year of publication:
2020
Pages:
149
Moral assessment:
Type: Thought
Nothing inappropriate.
Requires prior general knowledge of the subject.
Readers with knowledgeable about the subject matter.
Contains doctrinal errors of some importance.
Whilst not being explicitly against the faith, the general approach or its main points are ambiguous or opposed to the Church’s teachings.
Incompatible with Catholic doctrine.
Quality:
Recomendable:
Transmits values:
Sexual content:
Violent content:
Vulgar language:
Ideas that contradict Church teaching:
The rating of the different categories comes from the opinion of Delibris' collaborators 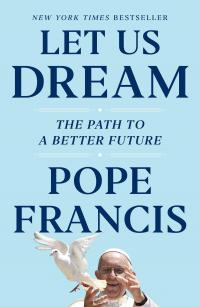 In this short book there are messages for all us and it’s written in an easy to follow style where the warmth but also the depth of the author’s character shines through. It was written in collaboration with British author and journalist Austen Ivereigh, who has written two biographies of Pope Francis although his influence only becomes clear when reading the postscript at the end of the book. It is written in three parts, suitably entitled A Time to See, A Time to Choose and A Time to Act, finishing with a short Epilogue.

The Covid-19 pandemic which dominated 2020 is the backdrop for the book. The Pope sees the pandemic as one of those moments in history when we are faced with an imperative for change. He cites the situation of several marginalised peoples in the world whose very difficult situations have been worsened by the pandemic, and makes it clear that there can be no simple going back to the old pre-pandemic normal.

He talks of other “Covids”, crises in the lives of characters such as David, Solomon, Samson and St. Paul and describes three of his own which were turning points in his life. He speaks of the glaring inequalities in the world where 1% of the world’s population own half of the world’s resources, and has very strong words for the emerging populist politicians and movements without naming names.

The book does have a positive note. If, having been drawn together in an unprecedented manner during the pandemic, we keep up that solidarity at an individual, community, political and international level, there is hope. But the challenge is there and the need for a new order in world affairs has never been greater.