[The Moonstone]
COLLINS, Wilkie
Year:
1868
Type:
Fiction
Public:
Adults
Moral assessment:
Type: Literature
Nothing inappropriate.
Some morally inappropriate content.
Contains significant sections contrary to faith or morals.
Contains some lurid passages, or presents a general ideological framework that could confuse those without much Christian formation.
Contains several lurid passages, or presents an ideological framework that is contrary or foreign to Christian values.
Explicitly contradicts Catholic faith or morals, or is directed against the Church and its institutions.
Quality:
Recomendable:
Transmits values:
Sexual content:
Violent content:
Vulgar language:
Ideas that contradict Church teaching:
The rating of the different categories comes from the opinion of Delibris' collaborators 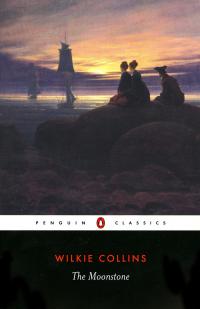 The moonstone diamond is stolen from an Indian shrine and handed to an English girl, but it disappears without trace. With many persons coming under suspicion, detective sergeant Cuff is called in to solve the mystery of its disappearance.

William Wilkie Collins was born in 1824 and died in 1889, after a 27-year addiction to opium and an irregular private life. He lived in London and was a great friend of Charles Dickens, who helped in the construction of the work. This early detective story has an ingenious plot and introduces a new narrative technique.