The Keys of the Kingdom

[The Keys of the Kingdom]
CRONIN, Archibald Joseph
Year:
1941
Type:
Fiction
Public:
Adults
Moral assessment:
Type: Literature
Nothing inappropriate.
Some morally inappropriate content.
Contains significant sections contrary to faith or morals.
Contains some lurid passages, or presents a general ideological framework that could confuse those without much Christian formation.
Contains several lurid passages, or presents an ideological framework that is contrary or foreign to Christian values.
Explicitly contradicts Catholic faith or morals, or is directed against the Church and its institutions. 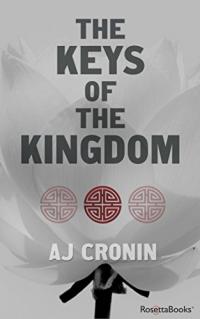 This book is the story of a Catholic priest (Chisholm), pious and apostolic, but not confortable with social conventions. The book narrates six decades of his life: it starts by the discovery of his vocation, his time at the Seminary, his first pastoral destination, the 30 years he spent as a missionary in China, and finally his return to his homeland.
He stayed 30 years doing missonary work in a remote city in China. At the begining he is not welcomed, and has to start from nothing; and epidemics of hunger, the black plague, and combats between warlords occur.

Despite the totally different culture, he manages to be accepted and loved, thanks to its dedication and tolerance, earning the respect and esteem of the Chinese inhabitants, spreading catholic faith among them.

Although it's a novel, the book has traces of history in the attacks against Catholics in Scotland in ends of XIX and beginnings of the XX century; as well as in the description of the miners' villages; and above all the realities of China.

The characters are portrayed well and realictically, highlighting the positive aspects, and insisting on responsibility for the common good.