Darwin: Portrait of a Genius

[Darwin, portrait of a genius]
JOHNSON, Paul
Year:
2013
Type:
Non Fiction
Public:
Generic
Tags:
Anthropology,
Biology,
Evolution,
Philosophy of Science
Publisher:
Penguin
Year of publication:
2013
Pages:
176
Moral assessment:
Type: Thought
Nothing inappropriate.
Requires prior general knowledge of the subject.
Readers with knowledgeable about the subject matter.
Contains doctrinal errors of some importance.
Whilst not being explicitly against the faith, the general approach or its main points are ambiguous or opposed to the Church’s teachings.
Incompatible with Catholic doctrine.
Quality:
Recomendable:
Transmits values:
Sexual content:
Violent content:
Vulgar language:
Ideas that contradict Church teaching:
The rating of the different categories comes from the opinion of Delibris' collaborators 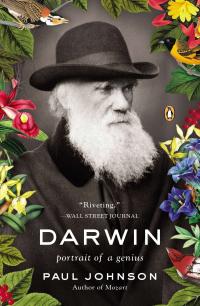 The historian Paul Johnson, centers on the controversial figure of Charles Darwin. For many scientists Darwin is a model to follow, but they leave behind the fact that in order to arrive at his conclusions, his approach was closer to the methods of the greek observers than the scientific experiments of the 19th and 20th century.

In the On the Origin of Species (1859), he drew his conclusions from the observations written in Voyage of the Beagle, with his axiomatic principle of natural selection, which was widely accepted and spread. His second great treatise was different in focus and content. In The Descent of Man, and Selection in Relation to Sex (1871) he primarily describes the evolution of men and he continues with the function of sexuality in natural selection. The following year, The Expression of the Emotions in Man and Animals (1872) would see light. For Darwin, inheritance was a mix of traits and that is why Johnson points out the historical misfortune that Darwin did not get to know the works of the Catholic priest and Father of genetics, Gregor Mendel, who demonstrated that there is no mixed genetic inheritance: there are, as can be seen in his experiments with pea plants, some dominant traits and others recessive. In fact, as has been indicated during his time, if the inheritance were a simple mix of traits of the parents, natural selection would be contradictory.

Johnson shows the social consequences of Darwinism. Darwinism infiltrated politics, economy, and above all, ideologies. There are the ideas of Spencer about the “survival of the fittest”; Francis Galton, the cousin and assistant of Darwin and creator of eugenics; or Cecil Rhodes, an adventurer, colonialist and millionaire, who was pushing the British Empire “to paint the map of the world red” as a slogan for the superior race, an idea not very far from the imperial program of Chancellor Bismarck, “blood and iron”. The laws of sterilization for weak and mentally disabled persons in the United States was introduced with the push from the Darwinists and they prevailed until 1970. The same thing happened in Germany, Norway, Finland, Sweden, Iceland and Estonia. In Sweden 65,000 people were sterilized.  With the exception of Canada, the British Empire rejected sterilization thanks to the battle raised by G.K. Chesterton and the help of the novel written during this period by Aldous Huxley, “Brave New World”.

In Germany, the racial history and modern antisemitism is known; it started with Houston Stewart Chamberlain, an Englishman who became a naturalized German citizen, married to the only daughter of Wagner, the author of the colossal history of the races. Darwin often used the word “combat” in a similar way that Hitler used it in Mein Kampf: combat in the struggle for survival is what is healthy, natural, progressive, and is life. Another word adopted by the Nazi government was “extermination”. Social Marxism (Engels, Lenin, Trotsky, Stalin, Mao, Pol Pot…) under the influence of Darwinism strongly influenced the Gulag, the deportation of minorities and cultural revolution. Even if Darwin avoided politics, he supported publicly the eugenics of Galton and protested against the vaccination of the weak, saying that they must be left to die and disappear.

Johnson laments that the biologists responsible for the fundamentalist darwinism have been deified by an ingenious and perverse group of philosophers. A pact between exhibitionist science and erroneous philosophy puts an obstacle to the truth and growth of knowledge.