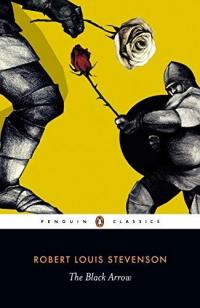 Adventure novel for young people, set in rural England in the sixteenth century, during the War of the two Roses. Richard Shelton is a noble landowner, heir to the provincial government. However, as a minor, it is his guardian, an unscrupulous man, who rules the region. The men of the county gather in a brotherhood called the "Black Arrow" to confront the tyrant. Richard, although he is against his guardian, must flee, and along the way will have to rethink his life and take a stand in the war.