A Song for Nagasaki

[A Song for Nagasaki ]
GLYNN, Paul
Year:
1988
Type:
Fiction
Public:
Generic
Publisher:
Ignatius
Year of publication:
2017
Pages:
320
Moral assessment:
Type: Literature
Nothing inappropriate.
Some morally inappropriate content.
Contains significant sections contrary to faith or morals.
Contains some lurid passages, or presents a general ideological framework that could confuse those without much Christian formation.
Contains several lurid passages, or presents an ideological framework that is contrary or foreign to Christian values.
Explicitly contradicts Catholic faith or morals, or is directed against the Church and its institutions.
Literary quality:
Recommendable:
Transmits values:
Sexual content:
Violent content:
Vulgar or obscene language:
Ideas that contradict Church teaching:
The rating of the different categories comes from the opinion of Delibris' collaborators 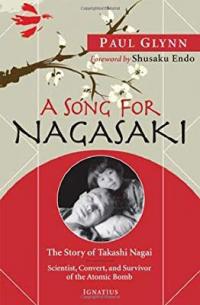 A biography of the Japanese radiologist who survived the atomic bomb in Nagasaki. Takashi Nagai (1908-1951) was a married Japanese scientist with two children. He generously promoted modern medicine in his country at the expense of his own health. The exercise of radiology gave him a leukaemia that did not, however, prevent him from continuing with a life of intense work. He survived six years of the Nagasaki atomic bomb, most of them bedridden.

He passed from Shinto to atheistic rationalism and later, having resolved his doubts and clarified the relationship between faith and reason, and drawn by the example of life of the Christians he knew, he embraced his vocation with all its consequences. This is a truly impressive and moving story.