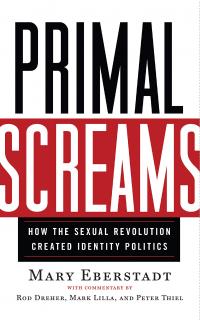 Who am I? The question today haunts every society in the Western world. Legions of people—especially the young—have become unmoored from a firm sense of self. To compensate, they join the ranks of ideological tribes spawned by identity politics and react with frenzy against any perceived threat to their group. As identitarians track and expose the ideologically impure, other citizens face the consequences of their rancor: a litany of “isms” run amok across all levels of cultural life; the free marketplace of ideas muted by agendas shouted through megaphones; and a spirit of general goodwill warped into a state of perpetual outrage.

How did we get here? Why have we divided against one another so bitterly? In Primal Screams, acclaimed cultural critic Mary Eberstadt presents the most provocative and original theory to come along in recent years. The rise of identity politics, she argues, is a direct result of the fallout of the sexual revolution, especially the collapse and shrinkage of the family. As Eberstadt illustrates, humans from time immemorial have forged their identities within the structure of kinship. The extended family, in a real sense, is the first tribe and first teacher. But with its unprecedented decline across a variety of measures, generations of people have been set adrift and can no longer answer the question Who am I? with reference to primordial ties. Desperate for solidarity and connection, they claim membership in politicized groups whose displays of frantic irrationalism amount to primal screams for familial and communal loss.

Eberstadt’s theory holds explanatory power that no serious citizen can afford to ignore. The book concludes with three incisive essays by Rod Dreher, Mark Lilla, and Peter Thiel, each sharing their perspective on the author’s argument.