The Memory Keeper of Kyiv 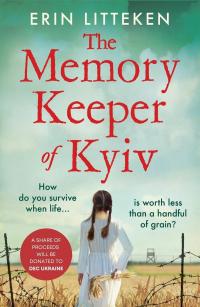 A great-grandmother of the author was Ukrainian and survived the extermination of millions of her countrymen in the early 1930's by the laws and persecutions ordered by Stalin. She was able to flee to the United States and rebuild her life. With the memories of the great-grandmother and other relatives and with her historical research, Erin Litteken has produced this excellent novel, one of those that leave a deep impression on the reader: for what is told, for the characters and for the way it is told.

In alternating chapters, the plot unfolds in two very different settings. On the one hand, Cassie's voice, in Wisconsin and Illinois, between May 2004 and May 2007: her husband has died in an accident and she is devastated; her mother convinces her to move in with her grandmother, who is alone and in very poor health. She agrees and will discover what the grandmother is hiding about her dramatic past in Ukraine, through a diary and other papers that she translates with the help of Nick, a fireman who knows the Ukrainian language, another very interesting character. On the other hand, the life of Katia, the grandmother, in Ukraine, from September 1929 to July 1934.

In the end, everything comes together and the grandmother's behavior in the midst of so much pain will help Cassie to deal with the loss of her husband. Also interesting are Cassie's daughter's relationship with Katya and the attitude of Cassie's mother Anna.

A great tribute to the victims of that massacre, which also helps to understand a little of the current situation. The Stalin quote that opens the text is shocking: "If one man dies of hunger, it is a tragedy. If millions die, it is only a statistic".