[A Good Woman]
STEEL, Danielle
Year:
2011
Type:
Fiction
Public:
Adults
Publisher:
Dell
Year of publication:
2009
Pages:
416
Moral assessment:
Type: Literature
Nothing inappropriate.
Some morally inappropriate content.
Contains significant sections contrary to faith or morals.
Contains some lurid passages, or presents a general ideological framework that could confuse those without much Christian formation.
Contains several lurid passages, or presents an ideological framework that is contrary or foreign to Christian values.
Explicitly contradicts Catholic faith or morals, or is directed against the Church and its institutions.
Quality:
Recomendable:
Transmits values:
Sexual content:
Violent content:
Vulgar language:
Ideas that contradict Church teaching:
The rating of the different categories comes from the opinion of Delibris' collaborators 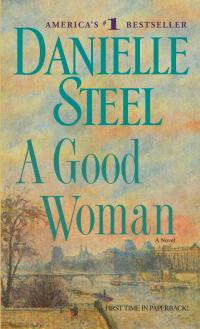 At the age of nineteen, Anabelle, the daughter of a family of wealthy New York bankers, has a whole future ahead of her. But misfortune knocks on her door: her father and brother tragically die when Titanic sinks, and seeing her mother solitary and traumatized for life leads her to give herself completely to her work. She decides to be a medical volunteer at Ellis Island, which ends up enthusing her and leading her to meet the one who will be her first love. But the one whom she considered the man of her life becomes a declared enemy; after being abandoned and for refusing divorce, her husband slanders and defames her. Anabelle is then forced to flee to France to study medicine, and there she works as a nurse during the First World War. But one day she decides to return to the United States for vacation and confronts the detractors. The book contains a sensual scene.