The Fires of Autumn 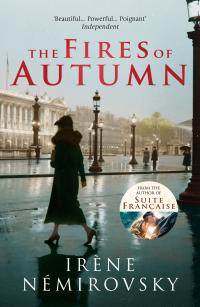 Fire in the Blood is a book finished shortly before the deportation and death of the author, and has been edited and published posthumous in 1957. Two versions of the novel with substantial differences are available to the reader. The newer version is a product of the work of Oliver Philipponnat (biographer of the author) and Teresa Manuela Lussone (who has a thesis on this novel). The additions are the third, fith, and ninth chapters, which the author had eliminated, but permits the contemporary author to understand the disastrous effect of the First World War (1914-1918).

The novel is set in Paris, during the time between the World Wars. It is the story of two pairs of protagonists who live their passionate lives in the social and moral dynamic of some decades marked with the Parisian bourgeois (the rich) tensions, which reached its limit due to the wars that devastated Europe. This is one of Irène Nemirovsky’s best works, whose setting, well achieved characters, fine and sound topics of social and human sense of meaning, and elegant, smooth and ordered literary style attracts and pleases the readers.

Irène Némirowsky (Kiev, 1903 - Auschwitz, 1942) is a Russian writer who lived as an expatriate in France, where she studied literature in The Sorbonne. She achieves a magnificent literary career in Paris, but which was shortened with her murder by the Nazis in the Auschwitz concentrarion camp. She has thirty great novels published, from which Suite française received the prestigious Renaudot Award posthumously in 2004.