HOLLAND, Tom
Year:
2019
Type:
Non Fiction
Public:
Adults
Tags:
History of the Church,
History of religions
Publisher:
Little, Brown
City:
London
Year of publication:
2019
Pages:
594
Moral assessment:
Type: Thought
Nothing inappropriate.
Requires prior general knowledge of the subject.
Readers with knowledgeable about the subject matter.
Contains doctrinal errors of some importance.
Whilst not being explicitly against the faith, the general approach or its main points are ambiguous or opposed to the Church’s teachings.
Incompatible with Catholic doctrine.
Quality:
Recomendable:
Transmits values:
Sexual content:
Violent content:
Vulgar language:
The rating of the different categories comes from the opinion of Delibris' collaborators 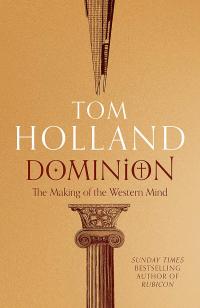 Dominion is an impressive synthesis of the history of the Christian world with a view to the influence of Christianity on Western thought, hence the subtitle The Making of the Western Mind. After a cursory examination of the ancient world and the events of the Old Testament, Holland traces the development of Christianity by focussing on pivotal events over the next two millenia, but always with a view to how the impact of these events on Christian thinking and by extension Western thinking.

Holland's treatment of Christianity is surprisingly balanced and sympathetic. He was brought up as an Anglican, but later accepted the standard Enlightenment arguments against Christianity. However, over time his studies of the ancient world have lead him to realise the values we treasure as typical Western values are in fact Christian in origin. His book argues again and again in defense of this idea. He is very fair towards the Church, and does not repeat the hackneyed explanations of the "crimes" of the Church, eg. in his treatment of the Galileo controversy he shows how Galileo's own firey and arrogant manner had much to do with his fate.  Church teaching on homosexuality receives a negative treatment. Holland suggests that the Christian revolution "still had a long way to run" to recognise that "men and women might be defined sexually by their attraction to people of the same gender".