[The Confidential Agent]
GREENE, Graham
Year:
1939
Type:
Fiction
Public:
Adults
Publisher:
Vintage
Year of publication:
2001
Pages:
272
Moral assessment:
Type: Literature
Nothing inappropriate.
Some morally inappropriate content.
Contains significant sections contrary to faith or morals.
Contains some lurid passages, or presents a general ideological framework that could confuse those without much Christian formation.
Contains several lurid passages, or presents an ideological framework that is contrary or foreign to Christian values.
Explicitly contradicts Catholic faith or morals, or is directed against the Church and its institutions.
Quality:
Recomendable:
Transmits values:
Sexual content:
Violent content:
Vulgar language:
Ideas that contradict Church teaching:
The rating of the different categories comes from the opinion of Delibris' collaborators 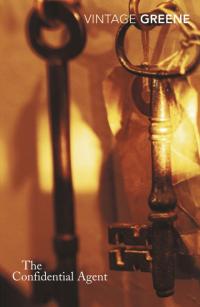 Graham Greene, the English novelist who was always a candidate for the Nobel Prize in Literature but who never quite made it, wrote a number of what he called “entertainments” – crime and spy novels. In a small continental country civil war is raging. Once a lecturer in medieval French, now a confidential agent for his unnamed government, "D" is a scarred stranger in a seemingly casual England, sent on a mission to buy coal at any price. Initially, this seems to be a matter of straightforward negotiation, but soon, implicated in murder, accused of possessing false documents and theft, held responsible for the death of a young woman, "D" becomes a hunted man, tormented by allegiances, doubts and the love of others.