[War Doctor]
NOTT, David
Year:
2019
Type:
Non Fiction
Public:
Adults
Tags:
Biographies
Publisher:
Picador
Year of publication:
2019
Pages:
304
Moral assessment:
Type: Thought
Nothing inappropriate.
Requires prior general knowledge of the subject.
Readers with knowledgeable about the subject matter.
Contains doctrinal errors of some importance.
Whilst not being explicitly against the faith, the general approach or its main points are ambiguous or opposed to the Church’s teachings.
Incompatible with Catholic doctrine.
Quality:
Recomendable:
Transmits values:
Sexual content:
Violent content:
Vulgar language:
Ideas that contradict Church teaching:
The rating of the different categories comes from the opinion of Delibris' collaborators 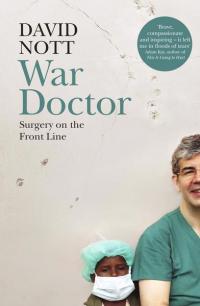 David Nott, a consultant surgeon based in London, has worked for periods in the most harrowing battle zones of our times: Sarajevo, Gaza, Syria, Sierra Leone and Libya. This book is a very personal and inspiring account of what he saw, how he worked, the lives he saved and the lives he lost while working among civilian populations under siege. No details are spared when it comes to describing injuries or surgical procedures, so this book is not for the faint-hearted but is a very good read for medical and nursing personnel. The author is restrained when it comes to allocating blame for the wars in which he works and makes no propaganda. His exclusive aim is to highlight civilian casualties and particularly those of children.

Nott reveals much about his own life and is candid about his strengths and fears under the most difficult of conditions and also on his return to normal life when he marries and becomes a father. His fears for his life in Syria lead him to pray to God and there is a revealing encounter with a heroic Catholic priest in Syria. He mentions that his fiancée goes to a church at lunchtimes to pray for him while he is in Aleppo and the book concludes with a thought-provoking afterword written by her, now his wife, in the course of which she alludes to her own Catholic background. This is a captivating read for anyone in medicine or nursing and who wants to understand some of the terrible humanitarian crises of our times.