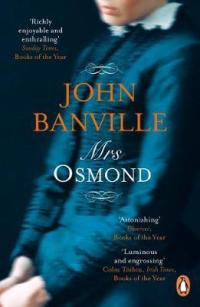 With Mrs. Osmond, John Banville emulates some of the best features of Henry James’s Portrait of a Lady, of which it is a sequel. John Banville is a master of English style: his writing is exquisite, with an authenticity which is a tribute to his sense of time and place. Although Banville is in debt to James, his feat is in one way greater, in that the world of a decadent Anglo-American aristocracy in 19th century Europe, contemporary and familiar to James, is considerably removed in time, class, customs, and language, from Banville. The suspicion Banville casts on convent life and the nuns to whom Pansy’s education is entrusted, may be the only modern interpolation. Banville almost always uses just the right word, even if this frequently leaves the reader reaching for his dictionary. The effect is helped by brilliant symbolism: for example, a gossiping countess is ‘like a blackbird hopping about in the undergrowth of society, nudging fallen twigs aside and twitching dead leaves, not a few of them fallen from the fig-tree ...’.

Banville faithfully echoes the subtle amorality with which James’s, Gilbert Osmond and Serena Merle, set about their project: they are internally consistent, both throughout Mrs. Osmond, and with the original story. With similar consistency and believability Isabel  emerges and grows as a heroine, though it may be doubted that the self-sacrificing insight through which she achieves the freedom which is a dominant theme of the book, will be long satisfied by her devotion to the feminist politics she espouses at the end.