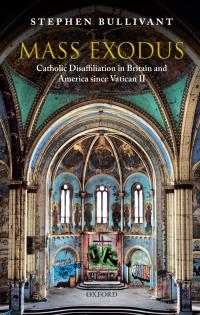 Stephen Bullivant is Professor of Theology and the Sociology of Religion, and Director of the Benedict XVI Centre for Religion and Society. He holds doctorates in Theology (Oxford, 2009) and Sociology (Warwick, 2019). He has written several books on the Catholic faith, the loss of faith, and atheism. The book is essentially a dispassionate, intensely scholarly examination of the question whether the unprecedented “mass exodus” of Catholics from the Church since the 1960s is a direct consequence, as many believe, of the reforms inaugurated by Vatican Council II (1962-65).

Bullivant begins his investigation by looking at one of the great aims of the Council: to stir the lay faithful of the Church from passivity and insularity and to waken in them their baptismal call to holiness and apostolate. Instead the Council appears to have succeeded only in having the faithful disaffiliate as never before in Church history. From this unprecedented falling away in the years following the Council, it is tempting to draw the inference: post concilium, ergo propter concilium (after the Council, therefore because of the Council). And so “One of the primary purposes of this monograph is to investigate whether, how, and to what extent that implication is true – at least, in Britain and the USA” (p. 12).

His conclusion is that a storm of secularisation was brewing in the post-war period and it hit just as the Council opened her windows for a renewal; the timing, but also the naive manner in which she embraced reform, meant that she got much more than she bargained for. For anyone interested in the history of the Council and its aftermath, this is an indispensable book. The writer’s engaging style – with occasional delightful humorous asides – makes even potentially dry chapters of sociological analysis quite readable. It is evident that he dominates both sociology and theology (he has doctorates in both). It is refreshing to see an academic who not only understands theology deeply, but who even has a sensitivity to the pastoral intricacies of issues he deals with.