[The devil´s bargain]
GREEN, Joshua
Year:
2017
Public:
Generic
Tags:
Politics
Publisher:
Penguin Press
City:
New York
Year of publication:
2017
Pages:
272
Moral assessment:
Type: Thought
Nothing inappropriate.
Requires prior general knowledge of the subject.
Readers with knowledgeable about the subject matter.
Contains doctrinal errors of some importance.
Whilst not being explicitly against the faith, the general approach or its main points are ambiguous or opposed to the Church’s teachings.
Incompatible with Catholic doctrine.
Quality:
Recomendable:
Transmits values:
Sexual content:
Violent content:
Vulgar language:
Ideas that contradict Church teaching:
The rating of the different categories comes from the opinion of Delibris' collaborators 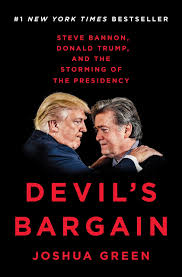 A must-read book to understand how Donald Trump won the White House written by Joshua Green who tells us the event that surprised us all in American politics, with a complete coverage consisting of six years of interviews since the beginning of Trumps presidential journey. It presents us with the keys to understanding the rise of the "alternative right," the fall of Hillary Clinton, and the rise of the forces that caused the greatest uproar in American political history. As we know Bannon, described as a hard-edged nationalist who plotted for years how to destroy Hillary Clinton and probably the mastermind behind Donald Trump's unexpected victory.

This book is more of a study of Bannon and how he and his allies hatched a right-wing conspiracy to arrest Clinton. And it brings up some very interesting thoughts that can help us shape the controversial figure behind Donald Trump. What were in fact his original values ​​and were they part of the inevitable effects behind the devil's deal? We learn, for example, that "The Wall" was not Trump's idea but Bannon's.

How did Bannon get from a conservative Catholic school, the Navy, Ivy League University, Hollywood, Hong Kong, Robert Mercer (and his hatred for the Clintons), Breitbart, and finally to the White House? It is truly a story to read and a definitely engaging tale leading up to the next elections in the United States that will help us to understand new forms of political strategy.