The Catholic Chruch & Science. Answering the Questions, Exposing the Myths 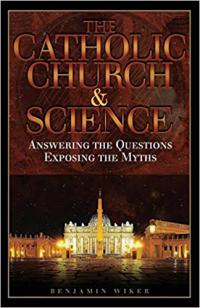 The book is a brief history of science and about its apparent conflict with religion, that the author calls myths. It is about man’s understanding of himself, the universe and his place in it, about a question that has been on man’s mind for millennia: the what, how, why of the world/cosmos. The book looks at science, that seeks to answer this question with the how, and religion that responds to the what and why.

It gives a step by step development of the scientific and theological minds as they have developed over the centuries, starting from ancient religious practices, both mono-theistic and pagan, where the author quotes works from the ancient Jews, ancient Islam and even the Babylonians through early Christianity to the middle-ages up to the 21st Century. The book also states clearly what the Church has definitively taught about divine revelation (supernatural revelation) and what it has left to the free discussion of men.

There are no theological inconsistencies or errors in this work and highly recommend it for anyone interested in the history of scientific thought, and the critic of religion.