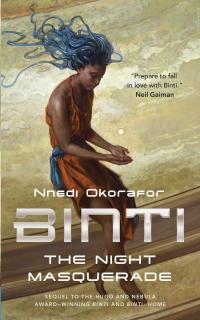 Nnedi Okorafor, of Igbo descent (Nigeria), was born in Cincinnati, Ohio, 1974, and has specialized in science fiction publications. The Night Masquerade is the third and final part of the Binti trilogy, the product of an overflowing imagination that bridges the difficulties of connection between the divine and the human, the hybrids of two or three races at once, the good and, at the same time, evil aliens, or the difficulties of mental-sensitive communication between subjects in themselves or with others who are nearby or at infinite distances. In addition, the novel has the possibility that the tree tops are inside the earth and the roots in the space: geotropism, docile to the user's will, to protect an entire tribe from extraterrestrial attack, dissolved among the woody ins and outs.

As a science fiction expert, Okafor uses a cryptic language with neologisms that are not explained and keeps the reader’s eye fixed on the following pages to resolve the meaning of the terms.

The heroine Binti, half Meduse and half humanoid himba, seeks to relieve tensions between Khoush (who are human) and Meduses. Binti will fall in love with Mwinyi Njem, a male zinariya creature, but despite the protection given to her by Okwu, a friendly medusa, she will die in the war. The story later opens up the possibility that Binti will be resurrected, moved at full speed to Saturn in the New Fish spacecraft.

The author's cultural context explains that she is addicted to animism. Its characters worship what he calls Seven Original Artists of All Things, as well as ressorting from time to time to New Age elements. The chaos of the story takes away the danger of this ideology, except for teenage readers.